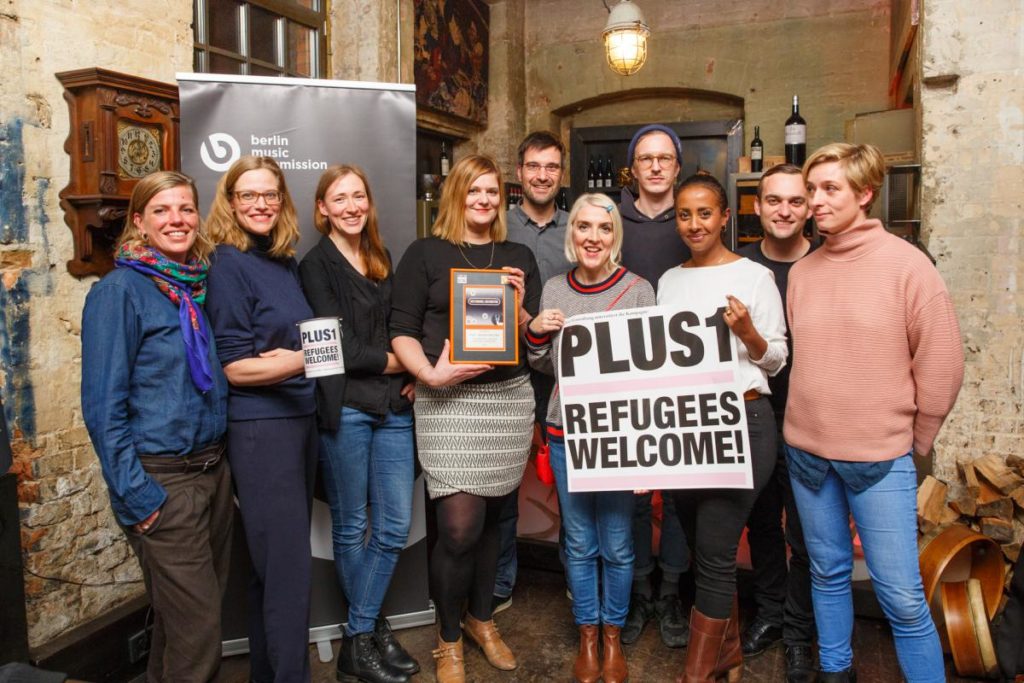 Since October 2015, the “Plus 1 – Refugees welcome!” campaign has been collecting donations in Berlin’s nightlife for aid projects for refugees. In recognition of the initiative and as an encouragement for similar campaigns in Europe, IMPALA Executive Chairwoman Helen Smith presented the campaign with the Outstanding Contribution Award 2016 in Berlin yesterday. This is only the second time a project has won this award after Label Love (UK) in 2011.

Helen Smith (Executive Chair of IMPALA): “This initiative was the obvious winner this year. So simple yet powerful, this project underlines how music and culture can make a difference.“

Stephan Rombach (of Plus 1): “On behalf of the entire campaign and those who make it possible we thank IMPALA for the honour! Especially in times when populism is on the rise, it means much to us to show solidarity from Berlin: Our mission is to collect donations for those who are not on the guestlist of the EU.”

Jörg Heidemann (Geschäftsführer VUT e.V.): “We are very pleased that the first IMPALA Outstanding Contribution Award to Germany is presented to such a great campaign. Plus 1 is an important sign of an open society and the german “Willkommenskultur”. We hope that this idea will be picked up and implemented in other European countries.”

About “Plus 1 – Refugees welcome!”

Since October 2015, “Plus 1” has collected 125,000 euros of donations from guests in clubs, concerts and festivals in and around Berlin and distributed them to Refugee Aid Initiatives.

We invite visitors to concerts, clubs or festivals, which are on the so-called guestlist, to make a donation for refugee projects. This way the infamous “plus one” on the guestlist gets a new meaning. The slogan “Everybody on the guestlist donates a Euro!” is to be permanently established in Berlin’s nightlife. All concert promoters, venues, agencies and labels in and around Berlin are invited to participate in the campaign!

Almost 4,700 people died in 2016 on their attempt to cross the Mediterranean. The political demand for safe and legal immigration is urgent and must be emphasised in public awareness. However, as long as the crossing of the Mediterranean for refugees is the only way to Europe, civilian sea rescue remains a sad necessity. Therefore, we support the essential work of SOS MEDITERRANEE, CADUS, JUGEND RETTET and SEA-WATCH in winter 2016/17. These four organizations have been founded in Berlin to prevent further mass migrant drownings. Their voluntary work is unfortunately more important than ever.

About IMPALA and the Outstanding Contribution Award :

IMPALA represents independent music companies across Europe. World leaders in terms of innovation and discovering new music and artists, independents produce more than 80% of all new releases. The Outstanding Contribution Award is one of two annual awards, which showcases European independent music and those who drive it. Previous winners include Label Love, Eurosonic Noorderslag, Armada Music/Armin van Buuren, Martin Mills (Beggars Group), Charles Caldas (Merlin) and Mario Pacheco. IMPALA also has a Mercury-style prize for the best independent album of the year, as well as a range of silver, gold and platinum sales awards. Artists recognised include José Gonzalez, Major Lazer, Christine and the Queens, Jamie xx, Caro Emerald, Trixie Whitley, Keny Arkana, Adele, Normhal, Skepta, And So I Watch You From Afar, Els Pets, Texas and Andreas Kummert.