Many nominees to the IMPALA European Album of the Year Award show strong sales results, with Arctic Monkeys reaching double platinum level for their “AM” album, French electronic music act M83 and Danish singer/songwriter Agnes Obel both landing a Diamond award with “Hurry Up, We’re Dreaming” and “Aventine” respectively, and U.S. indie rock band The National pocketing a double gold award for “Trouble Will Find Me”. There are also Gold awards for French singer Benjamin Biolay, British rock group Django Django gold and Dutch outfit Racoon gold, while Italian artists Elisa and Raphael Gualazzi both receive a Silver award for their latest album

Also of note are European album of the Year award winners The xx registering a Platinum award for “Coexist”, while Armada co-founder Armin van Buuren completed his already impressive range of awards, started in February with an IMPALA Outstanding Contribution to independent music award, with a Double Silver award for “Intense” as well as a Platinum award for his single “This Is What It Feels Like”.

IMPALA Executive Chair Helen Smith commented: “It is great to see so many current and former nominees for the IMPALA Album of The Year Award in this list, as it shows that the very quality of these albums is also endorsed by music fans all over Europe.” 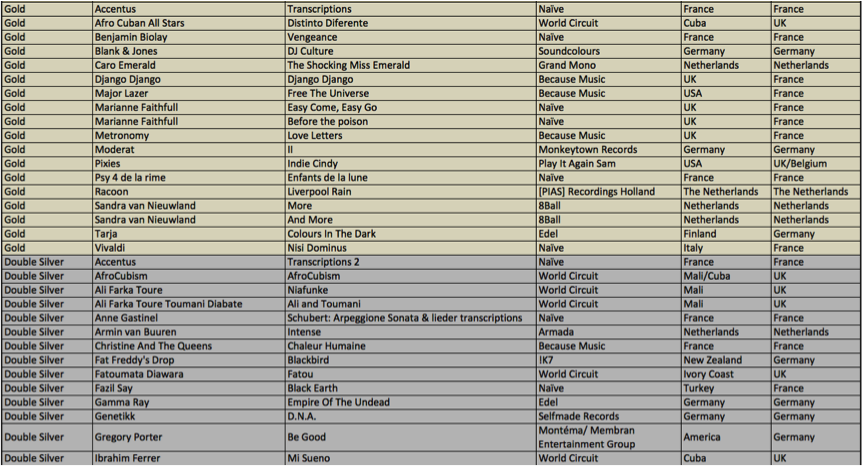 IMPALA was established in April 2000 to represent independent music companies. 99% of Europe’s music companies are SMEs. Known as the “independents”, they are world leaders in terms of innovation and discovering new music and artists – they produce more than 80% of all new releases and account for 80% of the sector’s jobs. IMPALA has its own award schemes to help promote cultural diversity and new talent and highlight the artistic contribution of independent music. IMPALA award winning artists include Guadalupe Plata who was voted winner of IMPALA’s last album of the year award, The xx, Armin van Buuren, Caro Emerald, Adele, M83, Mogwai, Vitalic, Soap & Skin, Royksopp and Andrea Bocelli.

The awards are part of IMPALA’s wider strategy to create new opportunities to promote independent music, real entrepreneurship and cultural diversity, in the face of increasing concentration.