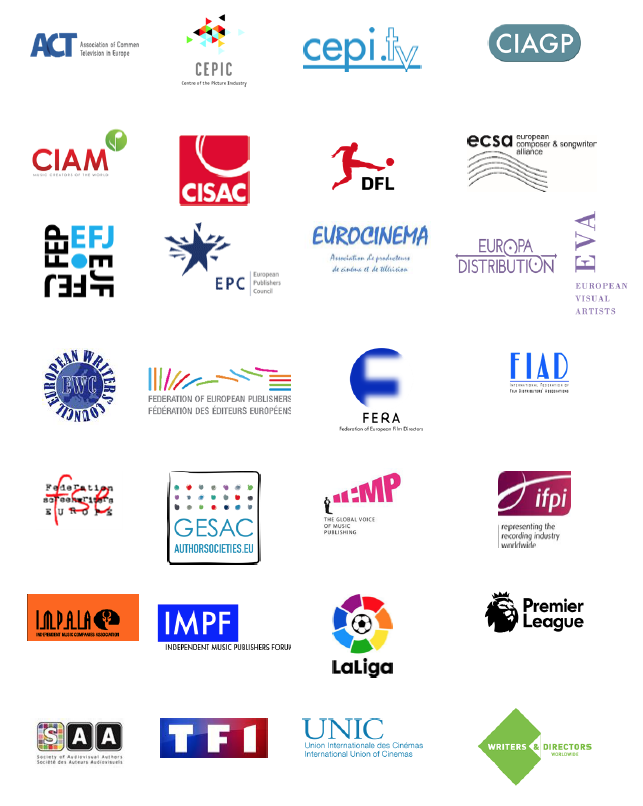 Today a wide range of organisations from across the cultural and creative sectors wrote to MEP Axel Voss, Rapporteur on the proposal for a Directive on copyright to ask him to support a meaningful legislative solution to address the value gap. Read the letter below:

We represent authors in all artistic fields as well as music, books and press publishers, film and music producers, broadcasting organisations, film distributors, cinema operators, football leagues and photo agencies, which are at the heart of the European creative sector.

First, may we congratulate you on your appointment as European Parliament Rapporteur on the Commission’s proposed Directive on Copyright in the Digital Single Market. We look forward to working constructively with you on this file.

We very much appreciate your acknowledgement of the critical issue of the ‘value gap/transfer of value’ which is hampering the growth and potential of our sectors. This situation is caused by inconsistent application and unfaithful interpretation of the European copyright rules by some digital platforms. UUC platforms have become major distributors of creative works – all while refusing to negotiate fair copyright licenses, if at all, with the right holders.

We believe that the European Commission’s proposal provides an effective basis for a fair and meaningful solution to this issue. Furthermore, its approach has to a great extent been supported by the CJEU in L’Oreal v eBay and confirmed most recently in Stichting Brein v Ziggo BV (‘The Pirate Bay’ case) cases.

Support for robustly addressing the Value Gap / Transfer of Value is reflected in an overwhelming majority of amendments in several of the relevant European Parliament committees, particularly in JURI, as well as the Opinions adopted in CULT and ITRE. We also fully support the amendments that you have tabled in LIBE and co-signed in JURI.  We do not however support the IMCO Committee Opinion which would exacerbate rather than solve the Value Gap/Transfer of Value problem.

A meaningful legislative solution to remove the distortion undermining Europe’s creative content market must clarify, in line with the CJEU case law, that platforms that store and provide access to copyright protected content uploaded (or displayed) by their users:

– undertake copyright relevant acts (i.e. communication to the public and as the case may be reproduction); and

– cannot benefit from the ‘Safe Harbour’ regime in Art. 14 of the E-Commerce Directive because they play an active role by, for instance, promoting such content or optimising the presentation of it.

Without clarification of the two points outlined above, there will be no solution for the producers and creators of European creative content.

The creative sectors seek a fair digital market, one in which the participants can operate with legal certainty and on a level playing field.

We look forward to working with you to ensure that the European Parliament’s eventual position reflects the legal and economic realities of the market, stops free-riding by certain platforms and brings long-sought fairness for creators and creative industries.

We remain at your disposal for any complementary information you may require.

ACT – The Association of Commercial Television in Europe represents the interests of leading commercial broadcasters in 37 European countries. The ACT member companies finance, produce, promote and distribute content and services benefiting Europeans across all platforms. At ACT we believe that a healthy and sustainable commercial broadcasting sector has an important role to play in the European economy, society and culture.

CEPIC – As the Center of the Picture Industry, CEPIC federates 600 picture agencies and photo libraries in 20 countries across Europe, both within and outside the European Union. It has affiliates in North America and Asia. CEPIC’s membership includes large and smaller stock photo libraries, major photo news agencies, art galleries and museums, video companies. CEPIC has among its members the big global players such as Getty, Shutterstock or Reuters. Through this membership, CEPIC represents more than 250.000 authors in direct licensing. The annual CEPIC Congress extends CEPIC’s network on all five continents. It is the largest global gathering of the international photo community representing 90% of the market worldwide.

CIAGP – The International Council of Creators of Graphic, Plastic and Photographic Arts provides a forum for exchange of information, experience and new tools on the administration and promotion of visual authors’ rights. www.ciagp.org

CIAM – The International Council of Music Authors promotes the professional, cultural, economic and legal interests of music creators across the world, and provides a forum for cooperation and networking. www.ciamcreators.org

CISAC – The International Confederation of Societies of Authors and Composers – is the world’s leading network of authors’ societies (also referred to as Collective Management Organisations, or CMOs).  With 240 member societies in 123 countries, CISAC represents over four million creators from all geographic regions and artistic repertoires including music, audiovisual, drama, literature and visual arts.

ECSA – The European Composer and Songwriter Alliance (ECSA) represents 57 associations of professional composers and songwriters in 26 European countries and Israel. The Alliance speaks for the interests of music creators of art & classical music (contemporary), film & audiovisual music, as well as popular music. www.composeralliance.org

EPC – The European Publishers Council (EPC) brings together Chairmen and CEOs of Europe’s leading media groups representing companies with newspapers, magazines, online publishing, journals, databases, books and broadcasting, communicating with Europe’s legislators since 1991 on issues that affect freedom of expression, media diversity, democracy and the health and viability of media in the EU. A list of our members can be found on www.epceurope.eu

EUROPA DISTRIBUTION – Europa Distribution is the European network of independent film distributors. Since its creation, it has reinforced the collaboration process among its members through information, brainstorming and training. The network’s aim is to strengthen European ties to improve the curation, promotion and distribution of independent films. With over 120 leading independent distributors in Europe and beyond, it serves as the voice of the sector and acts as a network and a think tank. The list of all members is available on our website: http://www.europa-distribution.org

EWC – EWC is the European non-profit federation of 45 national writers’ and literary translators’ associations and unions in 28 countries, representing over 150.000 authors in the text/book sector, working in 31 languages.

FEP – The Federation of European Publishers represents 28 national books and learned journals’ publishers associations of the European Union and the European Economic Area, responsible together 22 billion euros in publishers’ revenues (for an estimated market of 40 billion euros) and more than half a million new titles each year

FERA – The Federation of European Film Directors, founded in 1980, represents film and TV directors at European level, with 35 directors’ associations as members from 29 countries. We speak for more than 20,000 European screen directors, representing their cultural, creative and economic interests. www.filmdirectors.eu

FIAD – The International Federation of Film Distributors’ Associations gathers national organisations of film distribution companies. Film distributors are the intermediates between film producers and cinema exhibitors and cover the entire range of companies: small and medium-sized companies specialized in art house films, as well as larger companies focused on mainstream films. FIAD’s members operate in 15 countries where they cover 90 to 100 percent of the theatrical market.

FSE – The Federation of Screenwriters in Europe is a network of national and regional associations, guilds and unions of writers for the screen in Europe, created in June 2001. It comprises 24 members from 19 countries, representing more than 10,000 writers in Europe. @ScreenwritersEU – @screenwriterseurope

GESAC – The European Grouping of Societies of Authors and Composers comprises 32 authors’ societies from across the European Union, Norway, and Switzerland. As such, we represent over 1 million creators and rights holders in the areas of musical, audio-visual, visual, and literary and dramatic works. More information: www.authorsocieties.eu

ICMP – ICMP is the world trade association representing the interests of the music publishing community internationally.  The constituent members of ICMP are music publishers’ associations from Europe, Middle East, North and South America, Africa and Asia-Pacific. Included are the leading multinational and international companies as well as regional and national music publishers, mainly SMEs, throughout the world. As the voice and point of reference of music publishers, the community of composers and songwriters, and the production music sector, ICMP’s mission is to increase copyright protection internationally, encourage a better environment for our business and act as an industry forum for consolidating global positions.

IFPI –  The International Federation of the Phonographic Industry is the organisation that promotes the interests of the international recording industry worldwide. Its membership comprises some 1,300 major and independent companies in 62 countries. It also has affiliated industry national groups in 57 countries. IFPI’s mission is to promote the value of recorded music, safeguard the rights of record producers and expand the commercial uses of recorded music in all markets where its members operate.

LA LIGA – The Spanish Football League is a sports association integrated by the sports limited companies and football clubs of First and Second Division participating in the professional football competitions in Spain. The League organises the competition and commercialises the audio-visual rights on the National Championship of First and Second Divisions to national and international operators.

SAA – The Society of Audiovisual Authors is the grouping of European collective management organisations representing audiovisual authors. Its members (31 societies in 23 countries) manage the authors’ rights of over 120,000 film, television and multimedia screenwriters and directors. More information www.saa-authors.eu  / Twitter @saabrussels

Tf1 – TF1 is a media group whose mission is to inform and entertain. The group operates and develops five freeview channels and several special-interest pay-TV channels as well as their digital offshoots. The TF1 group’s businesses today cover the entire audiovisual value chain. France’s leading mainstream television group, TF1 is also an integrated media group that has developed activities in high-growth segments for a number of years.

UNIC – The International Union of Cinemas is an international trade association representing cinema exhibitors and their national associations across 36 European territories. Our team works from Brussels with policy makers and diverse stakeholders to better promote the social, cultural and economic value of cinemas in Europe and internationally.

W&D – Writers & Directors Worldwide champions the rights of creators working in the audiovisual, literary and dramatic repertoires and urges for the introduction of an unassignable, unwaivable right to remuneration for screenwriters and directors globally –  www.writersanddirectorsworldwide.org