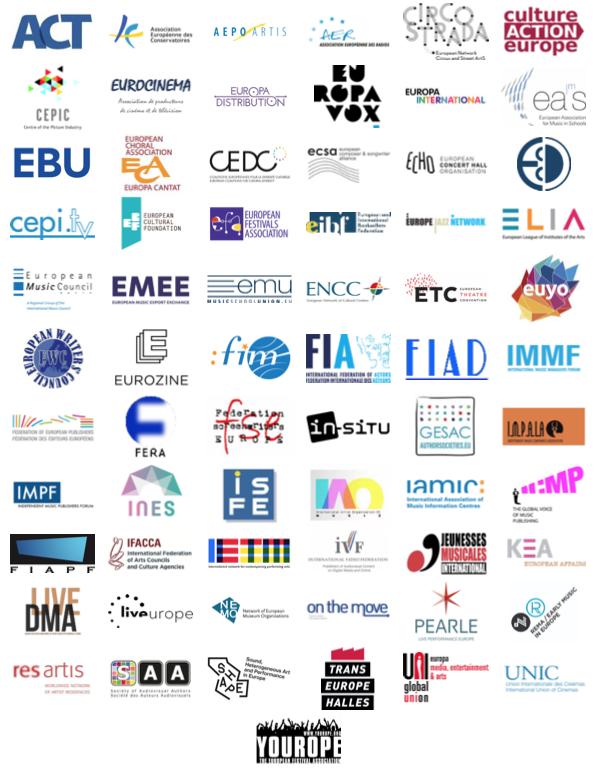 [UPDATE: A new letter with 70 signatories is available Boosting the EU culture budget – A call from Europe’s cultural & creative sectors.pdf]

Today, IMPALA and 66 organisations from across Europe’s cultural and creative sectors sent an open letter to the EU institutions urging them to give a significant boost to the EU budget dedicated to culture.

As the European Commission prepares to unveil its proposal for the next long-term EU budget at the beginning of May, cultural and creative sectors are joining forces to amplify their call for an increased EU culture budget.

Highlighting the contribution of culture to the social, economic and artistic development of Europe, the letter contrasts this with the small amount of EU money currently dedicated to culture (0,15% of the overall EU budget).

Helen Smith, IMPALA’s Executive Chair, commented: “If we are serious about Europe’s leading role in culture, now is the time to seize the opportunity to develop a real strategy and allocate a proportionate amount of the EU budget to this sector”.

The letter goes on to explain that despite being among the EU’s main assets, the cultural and creative sectors are notoriously underfinanced and their huge potential remains largely untapped.

Helen Smith continued: “Europe’s cultural and creative sectors are vibrant and eager to grow, but we could accomplish so much more with the right financial approach to culture”.

The letter calls on the EU to double the budget allocated to culture, and to ensure that cultural and creative sectors also have access to other sources of EU funding.

Helen Smith concluded: “Europe’s creativity will never run out. We need to focus on the unique strength and diversity of our culture. Making sure that these sectors are a horizontal priority within EU funding schemes and programmes would be a great place to start”.

You can download the letter here: Boosting the EU culture budget – A call from Europe’s cultural & creative sectors.pdf

For any questions about the letter please contact mphilibert@impalamusic.org

IN SITU (European Platform for Artistic Creation in Public Space)