This month Nielsen Music and IMPALA release two charts, with the overall Top 30 for 2012, and the last quarter charts highlighting the best climbers and new entries. Showcasing independent music, they feature acts from all over Europe such as Michel Telo, Youssoupha, Jose de Rico, Two Door Cinema Club, Alesso, DJ Fresh and of course Adele.

With Alt-J, Adele, Cro, Shaka Ponk, Caro Emerald, M83 and The xx, no less than seven artists in the charts have also been nominated for IMPALA’s European Independent Album of the Year Award, while 10 of the listed artists have taken IMPALA Sales awards in recognition of their commercial achievements so far.

Adele, with five singles in the yearly Top 30, leads the pack of indie artists in Q4 with the incredible success of “Skyfall”, while Die Toten Hosen (#6 in yearly charts with “Tage Die Wiese” and #3 in Q4 with “Altes Fieber”), Die Aerzte and Cro prove that the German music scene is livelier than ever. The on-going success of Swiss producer DJ Antoine, Norwegian duo Madcon, Belgian rockers Triggerfinger and French turntablists C2C shows the diversity of independent music in Europe.

Last week Nielsen Music International released a key report at midem in Cannes entitled “Companies and Consumers: Navigating Through Influencers and Triggers”. Nielsen Music found that radio remains the preferred music discovery channel in Europe. The range of music choice it offers may vary widely from one country to another and one station to another. Radio audiences in each territory are only hearing a limited fraction of the millions of songs available from digital retailers or streaming platform.

Helen Smith, Executive chair, IMPALA commented "It is interesting to see the correlation between what is working in terms of charts and our Album of the Year, as well as the Impala Gold, Silver and Platinum awards. We hope the data from Nielsen about the performance of stations in terms of diversity will be an incentive for European radio to do better, an issue also flagged by the IMPALA board."

Jean Littolff, Managing Director, Nielsen Music Europe, commented: “Despite the diversity of music sources, radio remains the great mass channel to push music to an audience, and is still by far the primary source of music discovery. However, radio stations have their own format restrictions and other constraints resulting in a limited numbers of unique songs broadcast. There is therefore fierce competition for playlist inclusion and the subsequent exposure.” 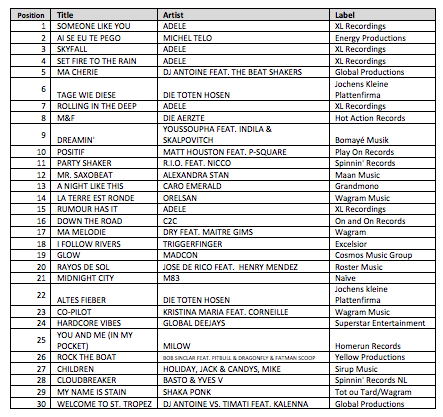 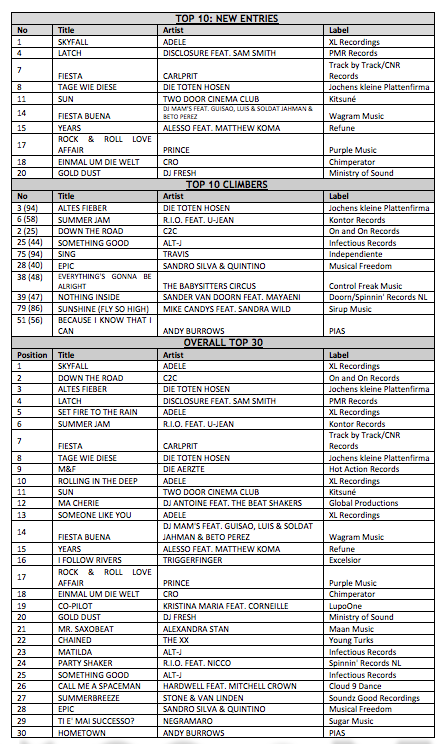 These new charts are part of IMPALA's bid to promote the brand of European independent music, which began several years ago. This project, for the first time ever, monitors the success of independent music with dedicated pan-European charts. Produced by Nielsen Music for IMPALA, these charts bring increased coverage of independent artists' successes, addressing both the requirements of the business for information and consumers' needs for awareness and exposure. Putting a spotlight on the artists' work and the labels that make it happen benefits the whole industry.

Nielsen Music is the measurement reference of the music industry, and the market data and research partner of choice for the music sector. Our locally based teams of research and music experts across Europe bring the best set of comprehensive, robust and quality insights to our music clients. Nielsen Music data allows the industry to access, understand and interrogate radio and music television airplay, digital download sales, internet behaviours and consumer generated media (buzz), complete advertising information and significant global consumer and ad-hoc research capabilities.

IMPALA was established in April 2000 to represent independent music companies. 99% of Europe’s music companies are SMEs. Known as the “independents”, they are world leaders in terms of innovation and discovering new music and artists - they produce more than 80% of all new releases. SME’s also produce 80% of Europe’s jobs. Their potential is enormous but is hampered by complex barriers to trade and severe market access problems.